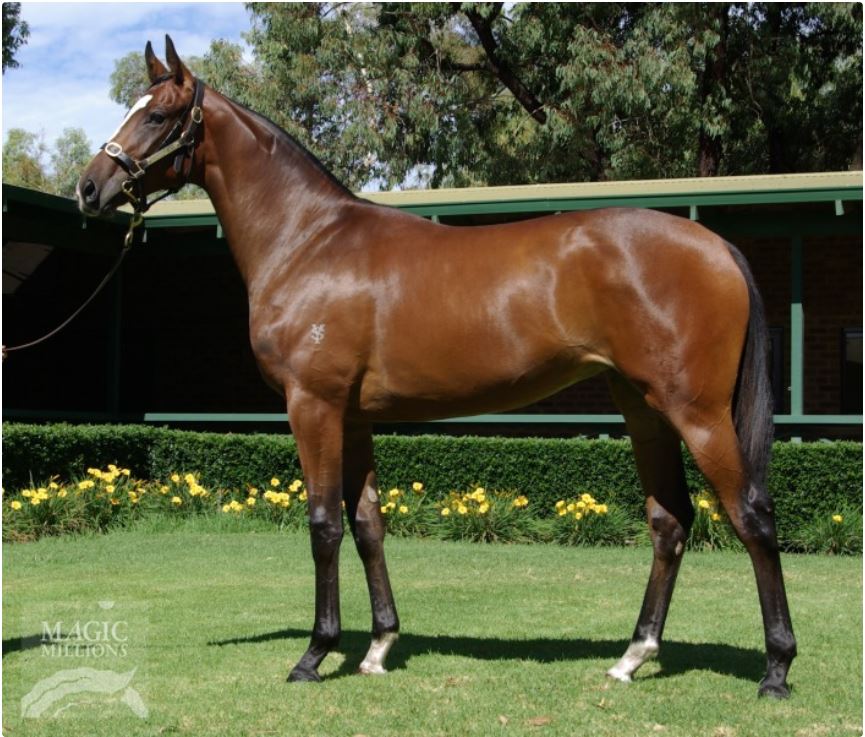 Go OZ Racing and join us to race this half-sister to one of OZ Racing’s most favoured gallopers, Euclassy Thing.

Euclassy Thing was as tough as they come. He was a fantastic horse winning 10 races and $316K – which in today’s dollars and prize money is more like $400K to $450K.

This filly has “fast runner” stamped all over her and she has every chance to do just that given she is by the outstanding sire War Chant.

She was personally selected by young up and coming trainer Martin Allan. Hopefully she can take over from Martin’s talented two year old of this season, Essayez, a winner of three of her five race starts.

War Chant is a World class Group 1 winning sire. His oldest Australian progeny are two year olds. He has two Group 1 winners to his name already and has sired 33 individual stakes winners and 36 individual stakes placegetters. His progeny have earned in excess of $44 million in prize money and growing.

War Chant has 369 individual winners around the World with a very high 68% winners’ to runners’ ratio. In other words, 7 out of every 10 runners of his win races.

On the race track War Chant won from 1200 metres 1700 metres. He won the famous Group 1 Breeders’ Cup Mile and was second in the Group 1 Santa Anita Derby. He also won at twice at Group 2 level.

War Chant is a son of the mighty Danzig, sire of Danehill, and is one of the most influential stallions of our time.

War Chant won as a two year old and has shown around the World he can produce two year olds.

From his first Australian two year old crop he has produced the exciting filly Chantski, the winner of the Group 3 Gimcrack Stakes and placed second in the Listed Supremacy Stakes.

War Chant currently sits in 5th place on the Australian First Crop sires list, with only Beneteau, Star Witness, Hinchinbrook and Reward For Effort in front of him.

Colluvium is a winning Citidancer mare. She is a half – sister to the stakes placed Penny West, a winner of six races from 1200 metres to 1900 metres. She ran second in the Group 2 Western Australian Oaks as well as the Listed Sheila Gwynne Stakes and Natasha Trophy. She also ran third in the Listed Detonator Stakes.

Colluvium is half-sister to former US galloper Bruin Supreme a winner of 13 races from 1300 metres to 1800 metres in the United States and Hong Kong.

Colluvium’s second dam, Miss Tripoli by Noble Bijou, is a winner of two races at 1200 metres and 1900 metres.

Martin is a freshman to the Western Australian training ranks. However, he is an accomplished horseman with an eye for a yearling and he can train.

Martin’s comments on why he bought this filly

“This filly is a very athletic looking filly standing at 15.3hh as a yearling. She has excellent conformation, a nice stride and a nice nature – really makes her presence felt”

Martin is a native Englishman who has been involved in the racing industry since an early age. His grandfather was a jockey and his brother, David Allan, is the stable jockey for UK trainer Tim Easterby in Yorkshire.

Martin spent time working for Tim Easterby’s stable. The stable has on average around 100 horses in work and is renowned for training juveniles. He also spent time with UK trainer Michael Dods and rode track work for a number of other trainers.

Martin rode as an amateur jockey, but struggled with weight.

When he moved to Australia he worked for 13 times Champion trainer Neville Parnham. Martin says his time with Parnham was invaluable in honing his training skills.

Martin says that by having quality yearlings come through his stable for breaking has really improved his eye for selecting yearlings.

Last year the young trainer paid $9,000 for Eassyez, a filly that burst onto the WA racing scene this season winning three of her five race starts and giving Martin a runner in the prestigious Group 2 Karrakatta Plate in his first year as a trainer.

Martin is committed to making his presence felt in the WA training ranks. He has 16 yards at Ascot, as well as a 30 acre property at Banjup complete with an 800 metre training track, jumps, paddocks and day yards. The property is just 10 minutes from the beach allowing him to mix up his training routines.